Long before the Marvel Cinematic Universe and DC Extended Universe existed, there was the Dark Universe – the OG shared ecosystem where iconic monster movies like Dracula and The Frankenstein interlinked. Attempts to reboot the franchise were never successful until now, with horror genre artisan Leigh Whannell’s modern reimagination of Sci-fi horror flick, The Invisible Man. And let’s just say, it’s nothing like the eponymous 1879 H.G. Wells novel.

The only thing that ties the 2020 movie to the classic novel is the ability of the protagonist/antagonist to turn invisible. While in the novel the invisibility is the result of a science experiment gone wrong, its movie adaptation gets a modern update with a high tech invisibility suit that tech-mogul Adrian Griffin (Oliver Jackson-Cohen) wields like a weapon. Plot-wise, Leigh Whannell spins the harrowing tale of Cecilia Kass (Elisabeth Moss)  who is desperately trying to escape the suffocating clutches of her abusive and controlling boyfriend, Adrian.

If you are expecting a simmering slow-burner, be prepared for a rude awakening. The opening scene immediately plunges you into the terrifying world of Cecilia which can be best described as a ticking time bomb. No time is wasted setting up the nature of Cecilia’s relationship with Adrian – details of the abuse are left up to our wildest, most disturbing interpretation. And it doesn’t take long for us to understand the gravity of the situation as we tiptoe nervously alongside Cecilia in an attempt to flee the labyrinthine house. Although she manages to pull off the escape with the aid of her sister, Emily (Harriet Dyer), and take shelter in cop-friend James Lanier’s (Aldis Hodge) house, the eerie background score that persists tells us otherwise. 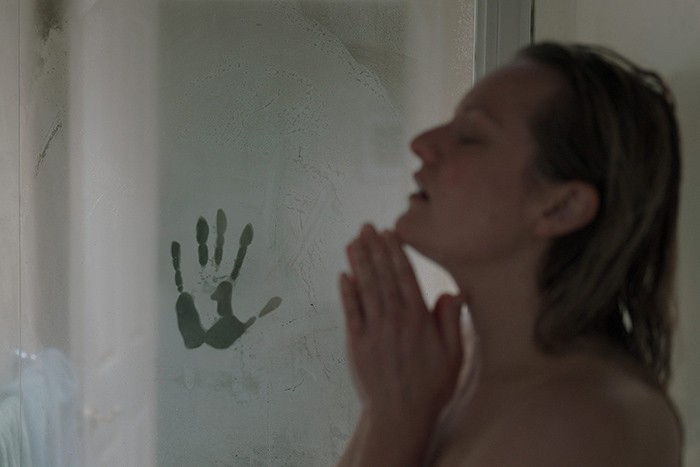 Adrian’s oddly-timed death coupled with the strange occurrences that follow, send the already agoraphobic Cecilia into a state of paranoia – or at least that’s what her concerns are brushed off as. As more signs point to the presence of an unseen entity tailing her, it becomes clear to us that she is tangled in Adrian’s cunning scheme to gaslight her by turning everyone against her. While any other horror movie would have left this vital piece of information towards the end for a grand reveal, Whannell makes it the crux of the story making us experience Cecilia’s agonising plight to be heard and believed, from her perspective. 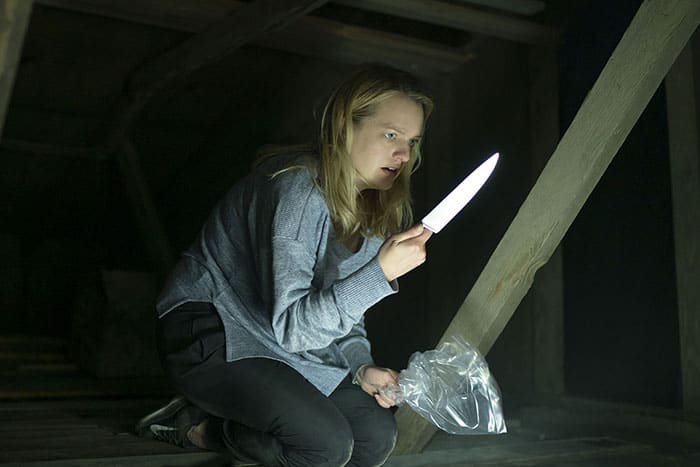 Gimmicky jumpscares are traded up for skilful cinematography and editing. Unsettling calculated panning shots to nothingness and unexplained happenings – a spontaneous kitchen fire, a random puff of chilly breath from no perceivable mouth – send our imagination into overdrive as we frantically try to spot the lurking assailant. Not to mention, Moss’s nuanced and expressive performance as Cecilia gets us teetering on the edge, anticipating the very moment the concealed Adrian bursts into view. The Invisible Man takes the general scaffolding of the horror genre and builds social commentary about domestic violence and gaslighting around it. Perhaps, the connection to serious real-world issues is what makes this movie so much more impactful than its predecessors. The invisible man isn’t just another monster, but a chilling manifestation of the constant fear that abuse victims face daily. It also taps on our own fears of being surveilled as technology gets increasingly invasive with its prying eyes.

Watch The Invisible Man not just for Whannell’s refreshing take on the 123-year old monster tale but for the absolutely satisfying character arc of the lead as she goes from the damsel in distress to her own knight in shining armour.

For an accurate depiction of this movie enjoy this meme:

All images courtesy of Universal Pictures.

Category CulturePosted on March 5, 2014January 20, 2016
Translate »
X
X
Share this ArticleLike this article? Email it to a friend!
Email sent!