A chain of islands located in the southernmost part of Japan, Okinawa is known for being the perfect summer getaway. More than just its magnificent beaches and coastlines, the former kingdom of Ryukyu also boasts ancient castles, tranquil forests, and a vibrant array of coral and marine life. In this virtual vacation, explore this popular tropical paradise in all its glory – from its bustling streets to hidden dive spots.

The centre of the former Ryukyu kingdom, Okinawa Island is the largest and most populous island in the prefecture. Home to the capital city, Naha, as well as swathes of uninhabited forest, the island’s rich and diverse culture can be seen in their historical buildings, shopping streets, and the wonderful hiking trails.

Head to the Okinawa Churaumi Aquarium Widely known as Japan’s best aquarium and one of the largest of its kind the world, the Okinawa Churaumi Aquarium is definitely a main attraction of the island. Located in Ocean Expo Park, explore this three-storey marine sanctuary and its 77 tanks of oceanic wildlife. Besides getting up close and personal with the likes of starfishes at the small (petting) pool, they have the first ever large-scale living coral exhibit. Finally, head over to Kuroshio Tank, where you can see giant whale sharks and manta rays swim by. See the walking tour here.

Travel Back in Time with Shuri Castle Built in the late 1300s, Shuri Castle served as the administrative centre and residence of Ryukyu kings for several centuries, and is one of the UNESCO World Heritage Sites in Okinawa. Start off at the majestic Shureimon Gate – the original one that still remains standing to this day. Trek up to the main hall of the castle, the Seiden, known for its striking vermillion walls. And catch the view of Okinawa from the Iri no Azana, a lookout point hidden around the castle. Take your time exploring this historical site in this virtual tour.

While the online tour still allows us to view Shuri Castle, the main buildings were destroyed in a fire last October. While reconstruction works are ongoing, there’s a digital model for your viewing pleasure, alongside stories of the significance of Shuri Castle in Okinawa here.

Stroll the Streets of Kokusaidori

Soak in the bustling atmosphere of Okinawa’s main shopping district with a walking tour, as the streets are lined with boutiques, restaurants, and bars. Venture into the colourful Heiwadori and Mutsumidori shopping arcades, with local wares and stone Shisaa dogs outside almost every shop. Further down, the street opens up to a range of tropical fruit stores, from pineapples all the way to passionfruits. Be sure to check out Daiichi Makishi, offering unique Okinawan foods like sea grapes.

The birthplace of karate, Okinawa has a long history of the sport – the martial art was practiced to defend the kings of the Ryukyu Kingdom. Opened in late 2017, the Karate Kaikan boasts an impressive dojo, as well as a museum dedicated to recounting this history of the sport. Take your time exploring the various training rooms and exhibits, with uniforms and weapons detailing the sport’s evolution throughout the years here.

If you’re interested in learning some karate yourself, you can now try it out in the comfort of your own home. The Okinawa Karate International Tournament team has a series of easy to follow videos for you to watch.

Bask in the Wonders of Nature at Hiji Waterfall Located in the north of Okinawa Island, Hiji Waterfall is tucked away in a forested area, perfect for a peaceful hike. Cross a suspension bridge in the midst of lush greenery to end up at the impressive waterfall, standing at over 26 meters tall. Take some time to enjoy the sound of running water and the tranquil atmosphere of the forest before returning to civilisation. Don’t forget to stop by the Ufugi Nature Museum, which provides information on wildlife you might have seen on your hike. Check out this amazing view here.

Get a Taste of Traditional Okinawan Dishes

What’s a trip to Okinawa without trying some of the local food? Okinawan cuisine differs greatly from Japanese cuisine, due to the islands’ unique history and culture. From dishes like Goya Champaru, a bitter goya vegetable stir fry to Mimiga, thinly fried pig’s ear, there’s sure to be something for everyone to enjoy. One dish that’s easy to make at home is Okinawa Soba – a savoury noodle dish with stewed pork belly, sliced fish cake, and pickled ginger. A soul food to many Okinawans, try this recipe here.

From pristine coral beaches to mountain ranges, the Yaeyama Islands should not be overlooked when visiting Okinawa. If you’re looking to escape from the hustle and bustle of city life, these islands offer rest, relaxation, and stunning views.

Known for having a number of snorkelling and diving spots, Ishigaki Island is the place to go for a fun beach vacation. In this snorkelling experience, dive into the waters along Yonehara Beach, a beautiful white beach with emerald green waters. Catch glimpses of schools of fish darting in and out of coral reefs along the sea bed for a magical nautical encounter.

Interested to see more? This video guide from the Okinawan Ocean team explores snorkelling at Ishigaki Island, where you’ll find everything from manta rays to rare coral beds.

Okinawa’s second largest island, most of Iriomote is covered in dense jungle and mangrove forests. While not frequented by tourists; the island is a hidden gem with its range of river tours to quiet beaches. Hope onto the Urauchi River Cruise and sail down the Urauchi River, admiring the mangroves along the way and ending up at Mariyudo Waterfall. At the end of the day, kick back and relax at Tudumari no Hama beach, one of the best spots to catch the sunset on the island – an unforgettable experience here.

West of the main Okinawa island, Kume is considered one of the most beautiful islands among those that make up the prefecture. Besides the abundance of natural monuments and historical sites, the jewel is also an officially designated nature park. 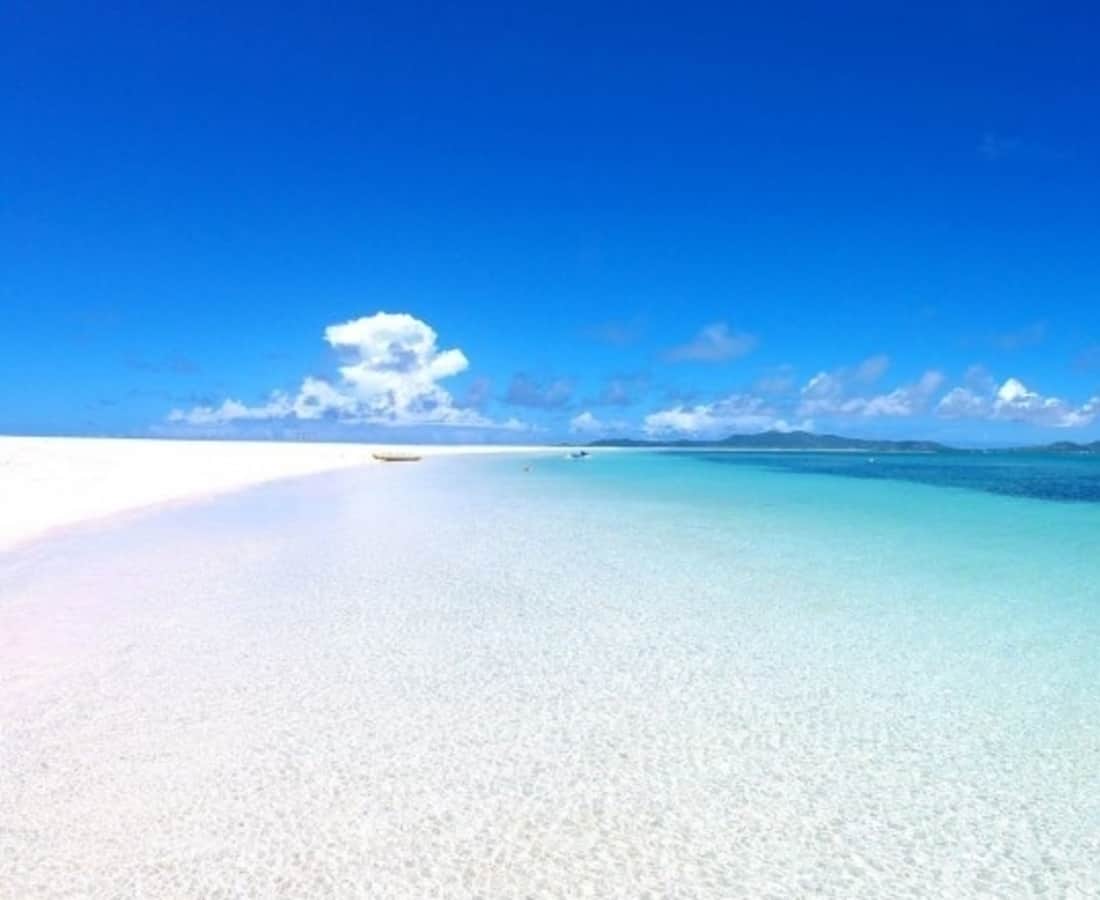 A seven kilometre long uninhabited sand bar lying next to Kume Island, Hatenohama Beach is one of the most well-known beaches in Japan. Stepping out onto its brilliant expanse of white sand, the beach is the perfect union of sea, sky, and shore. In this virtual tour, get a 360° view of its whole stretch, whether its high up in the sky from a drone shot or a rare scuba-diving perspective of its cobalt blue waters.

Category CulturePosted on August 30, 2016February 27, 2017
Translate »
X
X
Share this ArticleLike this article? Email it to a friend!
Email sent!