Skip to content
City Nomads > Culture > Entertainment > Film > Film of the Month: Tiong Bahru Social Club is a Whimsical Yet Meaningful Take on the Pursuit of Happiness Though the notion of a “happiest neighbourhood in the world” seems a tad unbelievable, the brightly coloured and bizarrely idyllic Tiong Bahru of Tan Bee Thiam’s Tiong Bahru Social Club is a convincing contender. Tiong Bahru, as you’ve never seen it before, is the retro-glam but futuristic setting of the Tiong Bahru Social Club, a data-driven pilot programme to create the world’s happiest residents. For Ah Bee, a 30 year old office worker leading a content but steady life with his mother, this seems to be just the opportunity to do something more with his life.

Employed as a happiness agent, Ah Bee spends his days taking care of the cynical and rebellious elderly resident Ms Wee and her cat, and splashing about in swimming pools. But lurking behind endless smiles and a lushly verdant and pastel-hued neighbourhood that’d make even Wes Anderson swoon is a carefully calibrated and methodical approach to happiness. Ah Bee’s personal happiness level is measured constantly by a Big Brother-like AI, as is his happiness contribution to the neighbourhood. And if a happiness agent contributes too little to the community happiness index, well, it’s off to the chopper with them. 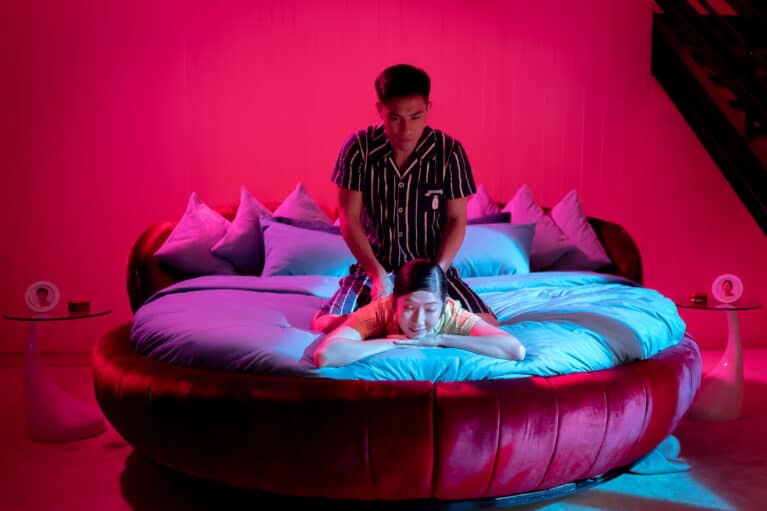 The happiness algorithm tries various ways to make the perpetually smiley but discontent Ah Bee happy, including pairing him up with a girlfriend, Geok, and promoting him to (quite oddly) the head of the complaint centre, where he becomes the receptacle of the residents’ complaints. But as time passes, Ah Bee comes to realise that this ‘ideal life’ might not be ideal for him.

It is with that understanding that Ah Bee, in what is possibly his longest monologue in the film, points out that maybe, emptiness isn’t a bad place to start from. In a move that defies the kiasu Singaporean mindset, Ah Bee chooses to drop out of the rat race and be content with contentment. But, as director Tan Bee Thiam points out, the real absurdity is to think of happiness as a competition in the first place. In this day and age, social networks — both virtual and real — where our behaviour is analysed and measured are ubiquitous, but this quirky satire has us rethink our need to be a part of them. Unlike more serious indictments of technology like the dystopian series Black Mirror, this film prompts a more gentle reconsideration of how much we might allow society and technology to dictate our way of life.

Props go to local veteran actor Thomas Pang for his layered portrayal of Ah Bee — a challenge with a character of few words but many emotions, who is always spoken over and for but rarely speaks himself. Other highlights include Jalyn Han as the crotchety cat lover (and fantastic dancer) Ms Wee and Jo Tan as the caring but inhibited happiness agent Geok.

Tiong Bahru Social Club is a film that tells a meaningful story, but never veers too dystopian or takes itself too seriously, full of whimsical visuals and some hilarious one-liners. And after the year we’ve all had, this light-hearted watch is just the ticket to leave you mellow, content, and just a little hopeful.

Tiong Bahru Social Club is in cinemas from 10 December 2020 at Golden Village.

City Nomads > Culture > Entertainment > Film > Film of the Month: Tiong Bahru Social Club is a Whimsical Yet Meaningful Take on the Pursuit of Happiness

Spicy Humour and a Mesmerizing Masala – Curry Tales by Rasa

5 cool projects to check out on haystakt.com

Category CulturePosted on March 5, 2019May 18, 2020
Translate »
X
X
Share this ArticleLike this article? Email it to a friend!
Email sent!