It’s another short week, and if you’ve stuck to Singapore this public holiday, it’s okay – there’s plenty to treat yourself to in the food and drink department with new menus at JAAN at Swissotel the Stamford, Shang Palace at Shangri-La Hotel Singapore, Smoke & Mirrors, and The Sampan.

Having recently rise 12 spots to 32nd place at the annual Asia’s 50 Best Restaurants Awards, modern British restaurant JAAN has introduced new springtime dishes in celebration of the occasion. The set menus (from $98++ for a four-course lunch and $268++ for 8-course dinner) will feature the White Asparagus Carpaccio, where sliced discs of the spears are paired with rich pike and trout caviar and topped with crème fraiche, and the Saffron and Black Truffle Pasta. Think hand-made Capellini is paired with succulent scallops from Scrabster Harbour in the Northern tip of Scotland, topped with fragrant truffle, scallop sauce, brioche croutons and shavings of cured egg yolk. Yum.

Shang Palace Singapore (which has been around since 1971) is launching three new menus – titled Nostalgia, Signature, and Innovation – that reflect both the historical and the contemporary flavours in Chinese cuisine. Created by Chef Mok Kit Keung, look forward to ‘lost’ dishes like Sauteed Fresh Milk, Crabmeat, and Egg White accompanied by deep-fried pork rolls with preserved bean curd, creative plates like Coddled Sliced Soon Hock Fillet and Young Coconut in a fish broth, and the comforting Traditional Stewed Goose, served in a clay pot. We’re pretty sure the folks at RedMart sell plenty of beer, because they’ve come up with their own, in collaboration with Archipelago Brewery. At 4.5% ABV, the new CODE RED Lemongrass Pale Ale with jasmine – a combination of two Southeast Asian flavour staples – is designed with the tropical climate in mind. The straw-golden colour comes from only using pale malts. Expect a light body, moderate bitterness, and a crisp aftertaste. Having opened in September last year, The Sampan on Boat Quay has already carried out its first menu revamp. Diners can still look forward to dishes inspired by Singapore and its neighbouring countries, from sharing plates and salads like Half-Shell Japanese Scallops with laksa leaf pesto and Malay Mixed Salad to more substantial plates such as the aromatic Indonesian Soto Madura with chicken and potato croquette and the South Indian Fish Head Curry. The new menu also has vegan, vegetarian and gluten-free selections for the guests. 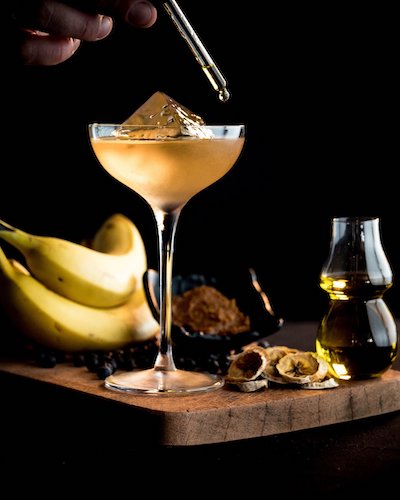 The Japanese Gang is Still Alive (S$25) under the section Sour & Neat is a twist on the whisky sour using rice vinegar and aquafaba to substitute egg white while the Peel & See(S$28) is a tribute to Andy Warhol’s iconic piece for the The Velvet Underground with banana, miso, and olive oil infused gin.