Mikhail Schemm’s background lies in influencer and trends consulting for boutique agency SCB Partners; he’s also had experience as a promoter and DJ in the warehouse party scene and a stint at Richie Hawtin’s Minus label in Berlin.

Since relocating to the Philippines three years ago, Mikhail has been focusing on his passion of building and consolidating the electronic music scene in his half-native Philippines. In this edition of City Nomads Radio, we chat about the electronic scene in Manila, his latest happenings, and his sound. Hey Mikail, what have you been busy with lately?

Hello! I’m actually home in Rome at the moment, home because it’s where my family is and where I grew up, then will be back in Manila for June 25, which is the grand opening of my first nightclub there!

The club, called XX XX (actually in Roman numerals, so pronounced twenty twenty), is what has been taking up quite a bit of my time. Together with my partners we have been busy with the A to Z of starting up a night club – apart from the construction, it was coming up with the right concept, interiors, marketing and of course music programming. Luckily, my partners are very experienced in the business in Manila and taking the lead on lots of things that I am not familiar with. My official title at the club is music director, so I’ve been locking in the first bookings, very exciting!

Apart from that I’ve also been busy with the UNKNWN parties I run with a few friends – it’s the travelling “party brand” concept that is common in cities like London or New York. We host parties at various venues in Manila, from warehouses to rooftops and nightclubs, and only reveal our guest DJ and the location shortly before the actual event. The next one is on July 2. Then there’s my agency Third Culture Music which is I guess an all round consultancy – office stuff as you can imagine! We work with brands, events and festivals in the Philippines, and around Southeast Asia as well.

What can we expect to see at XX XX?

A European style underground dance club, pushing quality music to the right crowd. The focus is the sound and dancing, not tables, bottle service or looking who’s who in the club. My vision for a night club is what I consider the real essence to clubbing – being able to release stress and let go of day to day life for a few hours, dancing away to music you love surrounded by friends.

In terms of music we’ll be focusing on house and techno for weekends, whilst during the week we’ll have more “chilled” music, ideal for a midweek drink so things don’t get too intense. We’ll have everything from disco, jazz, funk to world music, keeping things eclectic. We’ll also have another special weekly party which I can’t reveal yet. In my opinion, the scene is in a very healthy state at the moment, comparing to 3 years ago when I just moved from London. In terms of clubs, TIME has been flying the flag high for house and techno in the city, then there is also Black Market which is always great too. With the addition of XX XX, I’m hoping the bar will be raised in Manila for more options to listen to good music. Apart from that there are lots of bars where DJs play every night of the week, of course these aren’t full club formats but it still spreads the right music culture.

The underground music community is quite small here and everyone is familiar with each other. Recently it has been growing with lots of new young DJs stepping up with their own events, and there is a certain air of excitement that can be felt which is amazing. I feel that some kids are starting to look deeper into electronic music and are now discovering more niche genres, which is the key to the development of the scene – developing ones’ individual taste and following it, not following the mainstream bandwagon. 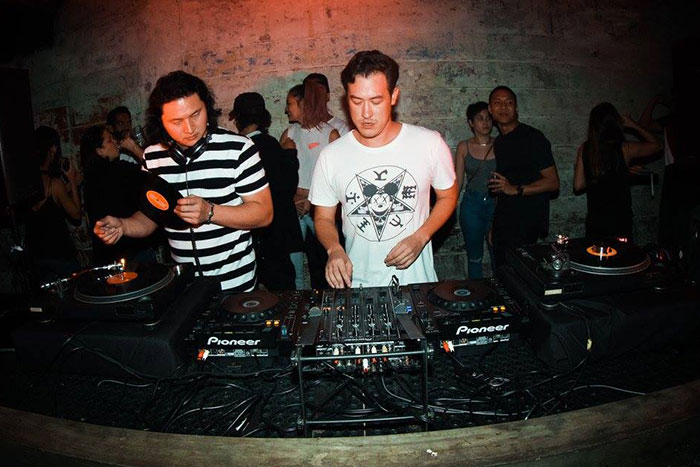 For those who haven’t heard you, how would you describe your sound?

This is a tricky one! It’s definitely usually within the house and techno regime when I’m playing clubs, but recently I have gotten back into digging for the odd stuff. I have always had a passion for world and ethnic music, which I have been trying to sneak into my sets also – think Cambodian rock and roll, Brazilian disco, Turkish funk, or 80s Italian music.

My roots are always in house and techno music though, usually groovy and uplifting stuff. I like to play music that makes people smile and feel happy… everyone says I’m a very happy person so I guess it transcends into my DJ sets.

Tell us about the curated mixtape you’ve put together.

I did something a bit different this time, trying to keep it to an actual mixtape vibe instead of doing the usual DJ mix. I chose a mix of tracks I love to both listen and dance to, and tried to keep things a bit slower and funky. There’s some current stuff I’m really into at the moment like Hunee or The Black Madonna, and other older stuff that I dug up again, such as Luciano who was a huge influence on my music, and some classic stuff like Mr.Fingers and Orbital.

Yes loads! First of all to my partners of XX XX, Erick, Anna and Jepoy, for putting together the club and inviting me to work together on this – opening a club has always been an ambition for me! Then of course to the whole team – David, Jordan and Alenka, it’s going to be a great time ahead.

Then of course my business partner and partner in crime Katrina whom I’ve been working with since almost 2 years now with Third Culture Music and other projects, and Celine for her help on everything as well.

Then there’s the UNKNWN crew – we’ve all been working so hard to push a house and techno party brand since the beginning of the year, and given the challenges, it looks like hard work, dedication and pconsistency are paying off.

Finally a shout to all the great people in the Manila scene – as mentioned earlier one can feel the push and energy coming from the scene now, everybody contributing their own part to it. We should all keep it up to help raise the profile of Manila in the international electronic music community!
–
To stay updated on Mikhail Schemm’s news, follow him here:
Soundcloud | Resident Advisor

Are You Keeping Up With 2019’s Mens Fashion Trends?

Category CulturePosted on April 3, 2017
Translate »
X
X
Share this ArticleLike this article? Email it to a friend!
Email sent!