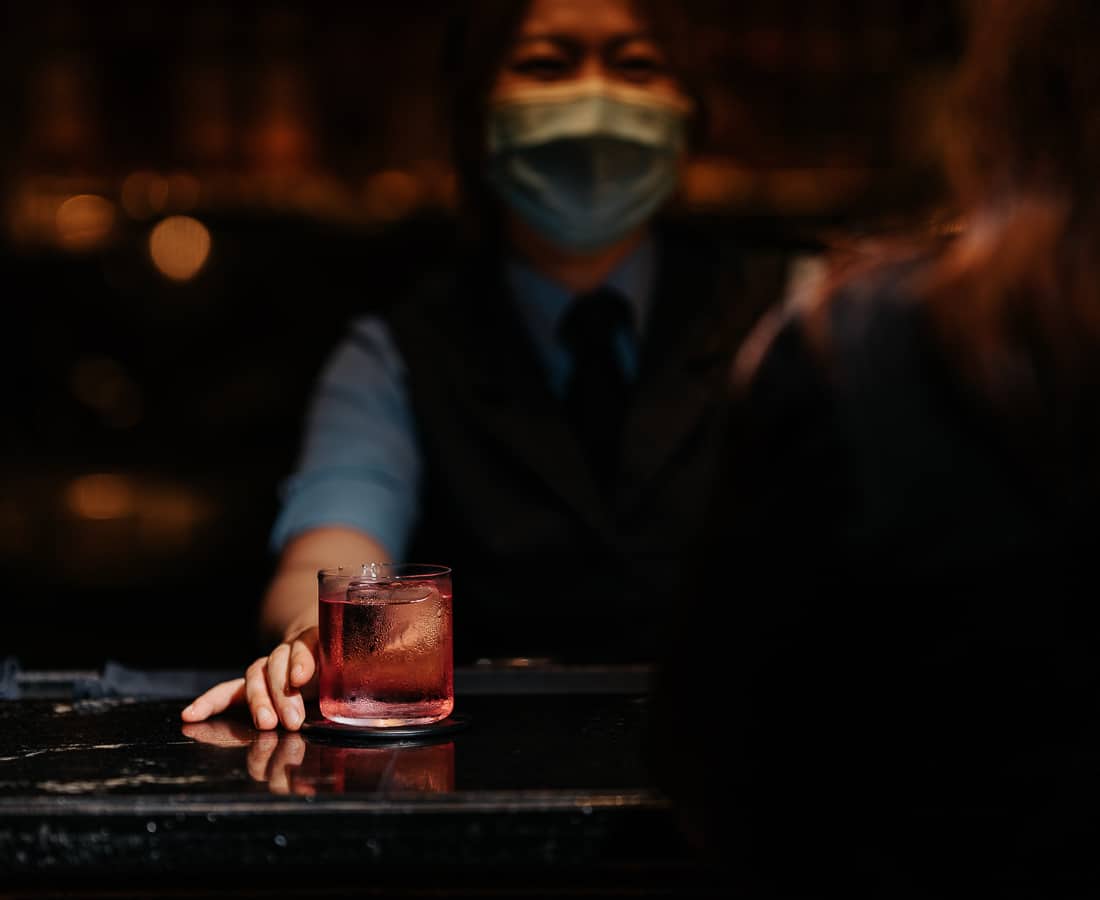 “Where there is a woman, there is magic,” wrote American playwright and poet Ntozake Shange in her 1982 novel Sassafrass, Cypress & Indigo. This International Women’s Day, themed #ChooseToChallenge, we recognise the women we know and love that have picked career in a male dominated industry, and are thriving anyway. Here are 14 ladies in the bartending and cocktail scene in Singapore, who make magic during the favourite part of our everyday lives (read: happy hour).

Initially bound for a career in the military, Singaporean Hazel Long gave bartending a shot. That decision turned into passion, allowing her to share her creativity with the people she meets. Hazel firmly believes that for the gender equality conversation to move forward, we have to stop thinking it’s women against men. She says, “We are bartenders first, and females second. If we have to carry half an ice bucket twice to make up for a single trip our colleagues do, so be it. Be faster, work smarter. Hospitality is hard work, but the fun pays for it, and then some.”

Born and raised in Incheon, South Korea, Sophia’s interest in fine drinking started with Manhattan, where she made history as their first female bartender in 2016 and helms the show as Head Bartender today. The accounting major is nothing if not proactive, raising a hand to transfer as floor staff from one of Singapore’s other restaurants to the bar and then putting in a request for formal bartending training.

With a spirit that reminds us of suffragettes, it’s no surprise then, that Sophia’s cocktail is named Bread and Roses – after the slogan of the first women’s labour union in New York. Starring The Glenlivet single malt whisky, the sweet and spiced tipple also incorporates apricot brandy, pomegranate vinegar, homemade spice syrup, and absinthe.

A recent transplant who brought her two adopted Scottish Fold cats Gaibei (chicken leg in Cantonese) and Bibi to Singapore, Bar Manager Shelly Tai is a certified KOL with more than 16,000 followers on Instagram. What started as a fun job turned into a stellar career for her, and the cocktail that got her hooked? The Sidecar – one of the first classic cocktails she learnt – made with Cointreau (of course).

This International Women’s Day, the Hongkonger  ruminates, “Equality means being treated fairly regarding pay, expectation of work quality, and opportunities. People tend not to expect as much from female bartenders; use it to your advantage. Learn as much as you can on the job, do research outside of it, and do your best!”

Growing up in Johannesburg and Auckland, Celia got thrown into the deep end one night during a busy shift as a server, and the rest is history. Having worked around the world in London, Los Angeles, and now Singapore, the dragon lady of Barbary Coast feels the biggest challenge women in  industry face is self doubt or a lack of confidence. She adds, “Just know you are capable and can do it, set your mind to it then let nothing and no one stop you or tell you otherwise. It’s not always easy, but nothing worthwhile is.”

For her signature cocktail Mon-Cherry, Celia pulls three of her all time favourite ingredients – Michter’s US*1 Single Barrel Rye whiskey, oloroso sherry, champagne – together with clarified cherry and lemon for something fun yet delicate, with a punchy backbone.

Born and raised in Singapore, Vanessa credits her sister Samantha – who represented Horse’s Mouth as a finalist in a cocktail competition – for getting her behind the bar. On the road to gender equality, the outgoing bar supervisor believes that men can show solidarity by challenging negative masculinities and standing up for anyone that’s treated unfairly.

Her signature cocktail, a Hendricks Orbium-based The Four Horsemen, draws inspiration from the four stages in the metamorphosis of butterflies. Vanessa adds, “there’s this quote I love about the beauty of a journey – ‘What the caterpillar calls the end of the world, the master calls a butterfly. Sometimes, women have to work harder to convince others, but be fearless and stay hungry! Have a plan for yourself to morph into a beautiful butterfly.”

Hailing from Ulsan in South Korea, June’s bartending journey started when she walked into a bar in Seoul and met a bartender doing exactly what she was looking for – a job that allowed her to meet new people. Four years in, she muses, “Many people don’t feel that this job has longevity; I had doubts too, until I met Monica Berg (co-founder of London’s Tayer + Elementary). Not only is she still active in operations, she’s leading the way in creating a new bar culture.”

Like June, her signature Smoking Lavender knows what it wants to be – a bittersweet nightcap designed to comfort before the day ends. Think Chivas Extra 13 American Rye Cask, vermouth, and peated blackcurrants with an infusion of lavender smoke.

14 years ago, Christyne Lee – then a floor staff – took matters into her own hands by asking to be trained as a bartender. Working her way up to Head Bartender, creativity and hospitality are the twin engines that drive the Malaysian native. She shares. “Being a successful bartender is tough for both men and women, but male colleagues can help by being more open in sharing the workload with us. Operations on a busy night feels like running a marathon, so team spirit is really important.”

Christyne’s signature cocktail is the Mulberry Mule, a riff on the classic Moscow Mule. Featuring Reyka vodka, the refreshing tipple boasts a smokey and fruity taste profile with the addition of her homemade mulberry shrub.

An internship at Singapore’s most popular beach club put Giselle Lee behind the bar for the first time, and before she knew it, she was hooked and became a part of Potato Head Singapore’s bar team. Under the leadership of Head Bartender and mentor Gavin Teravasan, the 21-year old hasn’t stopped expanding her knowledge and interest since she left Republic Polytechnic.

Despite being the only female in her team, Giselle shares that her colleagues “have always been very positive and welcoming. They’ve even gone out of their way to teach me the tips and tricks they learned throughout the years.” Her signature cocktail, Lil B, pairs Sailor Jerry spiced rum with cachaça, cassis (her favourite fruit), egg white, and citrus.

Much like their signature Vesper, shaken up with navy strength Ki No Bi Sei gin and served icy cold, Live Twice’s classy Principal Bartender Leow Yinying looks demure and yet, is unafraid to feed us the hard truth. In this male-dominated industry, men can certainly help by making the space more inclusive and help women feel more welcomed, she opines, “But that said, women should also recognise that if we want to be treated as equals, we cannot expect special privileges and treatment too.”

The 30-year old from Kuala Lumpur’s words of wisdom to women looking to join the industry are equally simple (and to the point), “Set goals, work hard to achieve them. Keep an open mind and don’t be afraid to push boundaries!”

On the biggest challenge as a female in the bar industry and overcoming it, Desiree says without a second thought, “Being seen as a woman and being promoted or well-liked by guests and peers because I’m a woman…I believe in earning respect by doing everything and anything they can do, and showing them – by my actions – that I can do it too.”

A veritable Jane of all trades, it’s no surprise that her biggest inspiration is local F&B overachiever Bjorn Shen (founder of Artichoke, Smalls, and more) and Desiree’s signature cocktail Des La Soul reflects her firebrand personality through and through. The riff of the Viex Carre highlights Greek amber spirit Metaxa, shaken with bourbon, yellow Chartreuse, sweet vermouth, and winter melon bitters.

Belying Michelle’s sweet and amiable appearance is steely determination, taking after her mother, who worked 18-hour days to raise four kids. Recounting an incident while bartending in South Korea, when a guest wanted to leave as her male colleague was not on shift, she continued, “I approached him with a cocktail I made, and he ordered two more drinks subsequently. This experience changed my outlook; I believe that if we are willing to step out of our comfort zones, be bold and confident, female bartenders will be able to hold their own in this industry.”

Michelle’s signature Bengal Brew, part of Colony’s curated cocktail collection, is inspired by teh tarik and even incorporates its pulling style. A twist on the espresso martini, Michter’s US*1 Small Batch Bourbon whiskey gives the creamy concoction a hint of spice and a smooth vanilla finish.

Despite having spent only a year behind the bar (so far), Kelly’s cocktail Black Forest Cosmo comes across as one created by someone far more experienced. A twist on the Cosmopolitan, it features Monkey 47 gin, cranberry hibiscus, wood sorrel, lime, and orange liqueur, offering more depth and complexity than the classic. The 24-year old Klang native credits her mentor Michele Mariotti, the previous Bar Manager of MO Bar,  for introducing her to the wonderful world of cocktails and bartending.

For someone fairly new to the industry, she believes that the most valuable thing that male (and senior) colleagues can offer is guidance. “Without colleagues like Michele and Joshua (Pang), I wouldn’t even know how to shake a cocktail,” she laughs. “The willingness to teach and share knowledge is so important.”

“The job is physically demanding,” Xuan admits, feeling the strain from just moving cartons of stock around when she first started. The Senior Bartender overcame this physiological challenge common to female bartenders by working out regularly and now carries a 20kg beer keg with ease. On steps that men can start taking this International Women’s Day, she says, “Stand up, speak out, and rally for change when you encounter instances of prejudice. And be more inclusive when it comes to doing ‘guy’ things, don’t just assume that women are not interested.”

Penicillin Fizz is Xuan’s go-to at Ah Sam Cold Drink Stall. Featuring ginger-infused Monkey Shoulder blended malt Scotch whisky and honey, the draft cocktail is sweet, sour, fizzy, and smokey at the same time – an easy drink for any time of the day.

When No Sleep Club opened, Yi Jun knew that the place being opened by women was going to be something that was highlighted. “But making sure the things really important to us (the venue, products, and the hospitality) were not overshadowed has been a priority,” she explains. Grateful that she hasn’t felt any difference in treatment in the venues that she has spent the most formative years of her career, the co-founder of No Sleep Club continues to practise the same values taught by the people that come before me to continue the same genderless workplace culture.

The cocktail Yi Jun chose for this story is her bar’s house Gin & Tonic. Based on a childhood snack made by her mum, Citadelle gin’s citrus and pepper notes perfectly complements fresh clarified guava juice, sakura vermouth, and a lacto fermented plum salt and sugar rim.

All images created by Joel Lim Photography. All photos for this story were taken during off-service hours. Lyf: A New Way to Live and Travel