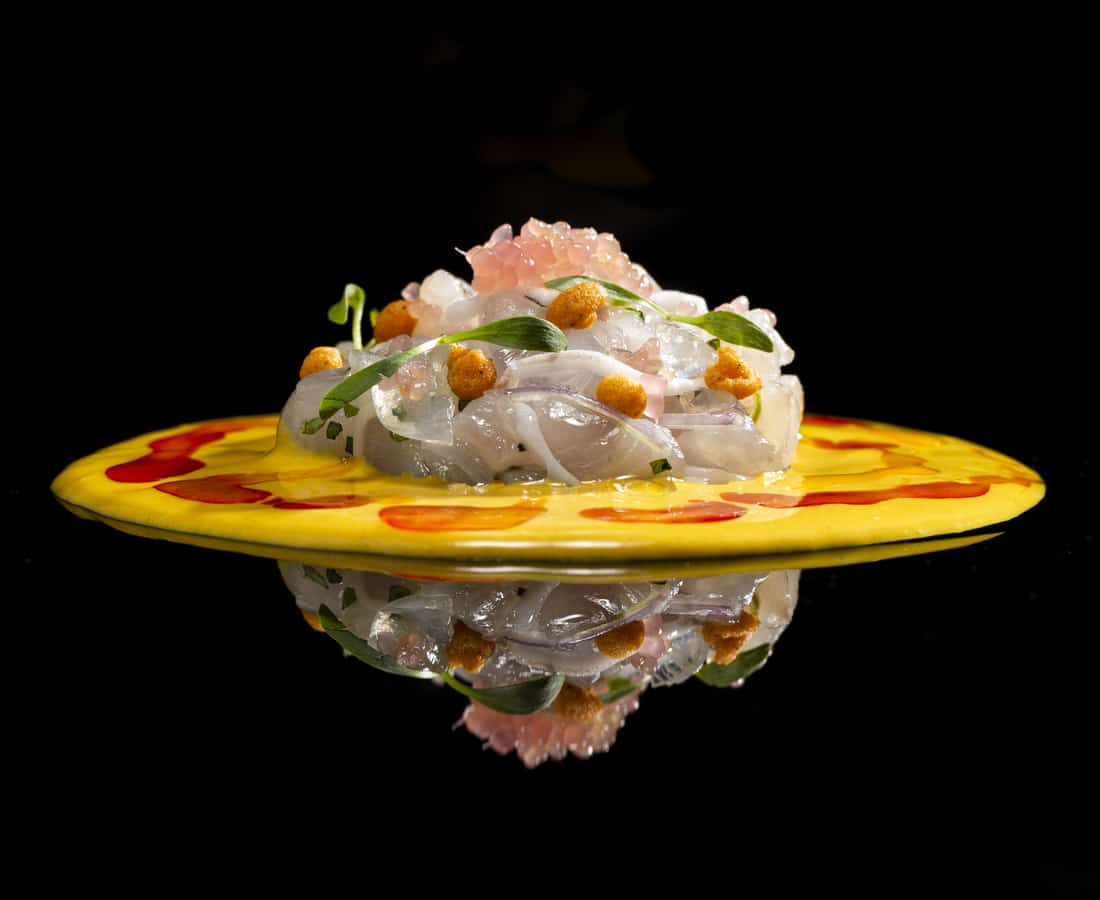 The magic of a romantic film is that the whole world gets a rose-tinted refresh – anything and anyone’s life can be renewed and reimagined. That’s the dreamy feeling we get when we step into Firangi Superstar, The Dandy Collection‘s newest modern Indian concept along Craig Road. Dubbing itself a ‘foreigner’s love letter to India’, it’s a space where classical cuisine gets whimsical, colonial India meets Wes Anderson technicolor, and even a firangi (aka foreigner) can rewrite the script.

Like a love letter, Firangi Superstar oozes old-world romance. The 93-seater space is split into four themed areas, each as marvelously immersive as a movie set. Step into the Officer’s Club, a genteel salon of dusky reds and wood paneling. With its walls lined with antique rifles and photographs of turbaned officers, this is one plush spot to sip a gin-and-tonic. Or hop aboard the Old Railway Room, a private dining ‘carriage’ framed with train windows and racks of antique suitcases – it’s a tableau straight out of a vintage murder mystery.

For a taste of aristocratic style, slide into one of Elephant Palace‘s sumptuous booth seats. Inspired by the blue room of the Udaipur City Palace, this section is all turquoise tones and Rajput-style arches, guarded by a majestic pair of bull elephants. Tucked away in the back, meanwhile, is the Jungle Lodge – a safari-lush patch of Indian wilderness prowling with murals of big cats.

‘Firangi’ is a somewhat unfriendly epithet for ‘foreigner’ in India, particularly a British or white person – a bit reminiscent of Singapore’s ‘angmoh’, though the term has expanded to include foreigners of all stripes. Head Chef Thiru Gunasakaran (formerly of Spago by Wolfgang Puck) counts himself a firangi – as a third-gen Malaysian with South Indian heritage, he grew up with Indian food yet trained in French-Western cuisine. In his firangi’s hands, though, traditional flavours get translated into something fun and fresh.

Take This Is Not Aloo Gobi (S$16), a playful dish you certainly couldn’t mistake for the humble potato-and-cauliflower classic. There’s a bed of very moist cauliflower coucous fried in ghee, given a bittersweet finish with mustard seeds, raisins, and a spice compote. Its crowning glory, though, isn’t the tandoor-charred florets heaped atop, but rather the addictive potato cubes alongside. Finely sliced potato are brushed with ghee, then compressed and fried into crisp, buttery cubes.

If you’re a fan of fellow Dandy Collection concept Neon Pigeon and its edamame hummus, you’ll want a taste of the Beirut Bhatura (S$12). This fresh, silky celeriac hummus comes spiced with chickpea masala and pomegranate seeds – ideal for mopping up with fluffy bhatura (deep-fried bread). Another small plate, Sothi Fresh (S$22), is a refreshing marriage of snapper ceviche and sothi – a light coconut milk curry that doesn’t overpower the fish’s delicate sweetness.

Chef Thiru’s cheeky side pops out again in the Prata Waffle ??? (S$24). This twist on American fried chicken and waffles stars perfectly crisp prata pressed in a waffle-maker, served with spice-rich Madras-style fried chicken. A drizzle of jaggery syrup replaces the usual maple syrup, while butter chicken sauce on the side takes the Indian soul food factor up a notch.

By now, we’re appreciating how his creations aren’t just playful – each offers a complex waltz of the familiar and the fantastical. Perhaps no dish encapsulates this better than the Salvador Thali (S$41), which makes avant-garde art out of the humble pumpkin. Bringing together the tangy, savoury, and spicy flavours found in a thali, this large plate features pumpkin steeped in a sambhar marinade and tandoor-charred to smoky sweetness. The pumpkin slices are then slicked with a medley of punchy lime pickle, fried salted chili flakes, quinoa, and pumpkin seeds, then served with quenelles of mint-coconut paste. The result tastes as colourful as it looks.

There’re more traditional large plates like tandoori lamb on the menu too. Dubbed Indian Saddle (S$19 per 100g), this lamb porterhouse is marinated in spiced yoghurt and tandoor-cooked to tenderness. A herbaceous splash of chermoula does nothing to hide the unabashed gaminess of the meat. It’s best spooned up with a fragrant bowl of Anise-Ghee Rice (S$6).

Matching the grub is an intriguing range of Indian riffs on cocktail classics. Laced with chai masala, the Chai Ramos Fizz (S$22) is an instant hit for us with its cinnamon warmth and meringue smoothness. Meanwhile, the Curry Leaf Boulevardier (S$26) spices things up with roasty coconut bourbon and curry leaf. Look forward to a gin-and-tonic lineup featuring spirits from India and round the world – it’s apt that they’ve crafted the menu to mimic a vintage set of train tickets. Hop aboard.

5 rising Chicken Rice masters you have to try in Singapore

Cocktails, coziness and full bellies at Five and Dime Eatery