A ryokan stay is perhaps the quintessential cultural experience when you visit Japan, and these days, the Japanese guesthouses run the gamut of old-school traditional to the slick and modern. Located in Ōtemachi – a 10-minute walk from Tokyo Station and five minutes to the Tokyo Imperial Palace -, HOSHINOYA Tokyo definitely belongs to the latter end of the spectrum, given the historically rich neighbourhood. Before Ōtemachi was home to the headquarters of financial and media giants of Japan, it housed the lavish residences of daimyo (vassals of the Tokugawa Shogunate) during the Edo period of 1603-1868.

Opened less than a year ago in July 2016, the 17-storey hotel stands out from its neighbouring skyscrapers by looking like an elegant jewel box with its komon-patterned (traditionally featured on kimonos) metal lattice exterior. Contrary to its modern façade, your education in the ethos of a traditional ryokan begins upon arrival, where you remove your shoes in the lobby – they’re kept on the ground floor in lockers cleverly made to look like a detailed wall – and are led upstairs to your room. This process is both an invitation for guests to treat the entire building as if it were their home, as well as a method of preventing the uninvited from entering the premises, thus highlighting the exclusivity of the property. Unlike a typical ryokan with wooden flooring, every walkable surface of the hotel is covered with soft tatami matting, even the elevator and the corridors. Whether you walk around barefoot, in socks, or in slippers in your own home, there’s no doubt that you’re encouraged to do the same at Hoshinoya Tokyo. But frankly, what makes this place so homely is the Ochanoma Lounge, which is available on each floor. With a communal table and comfortable chairs for working on the computer or couches to indulge in some reading, the lounge is meant to be a living space for guests living on the same floor of the hotel. Rest assured it doesn’t get crowded, since each floor only has six rooms, catering to a maximum of 13 people.

The Ochanoma Lounge is also stocked with specialty teas and coffees, snacks like ice lollies (have one after you spend some time in the onsen), rice crackers, sweets, and even mini servings of instant noodles. Complimentary alcohol offerings include sake and wines by the glass, though these are available only during the hours of 8am to 9pm, when the lounge is manned by Hoshinoya staff. Should you fall in love with a particular label, it’s available for sale by the bottle for your leisurely enjoyment. We were also told that the alcohol selection changes monthly, and the snacks are rotated to best match what’s on offer.

Hoshinoya Tokyo’s 84 rooms are spread over three room categories named after flowers – Yuri, Sakura, and Kiku (lily, cherry blossom and chrysanthemum). While all of them feature shoji paper sliding doors, bamboo closets, and tatami matting for the traditional aesthetic, they’re equipped with modern beds instead of futons. We put up in the Kiku. The largest of them at 83 square metres (893 square feet), it can be configured for double or triple occupancy since all the beds in the room are single-sized. Both the Yuri and Sakura range from 41-49 square metres (441-527 square feet) and it depends on whether you prefer corner rooms for privacy or one located closer to the lounge for a true ryokan experience.

Furnished with a lounge sofa, dining table, writing desk, and even a walk-in closet, our Kiku room faces south, which means that plenty of natural sunlight filter in during the day. Outfitted in neutral tones of beige, grey, and black, the generous bathroom has both a shower and a tub; and if you want to know how it feels like bathing outdoors, simply open the windows of the bath area. Alternatively, put on the robe waiting in the closet and head upstairs to the onsen. The alkaline waters of the hot spring purportedly have the health benefits of boosting blood circulation, treating cuts, and reducing fatigue. True or not, it makes for a nice, leisurely dip with the water hovering around 41-42 °C.

The baths are separated by gender and traditional hot spring etiquette is observed. The non-Japanese might feel a little self-conscious descending into the water stark naked with nothing but a face towel, but I gradually got used to it since I visited the hot spring no less than three times during my two-night stay. And as if having the onsen on the top floor of the hotel isn’t good enough, a corridor leads from the smaller interior bath to a larger bathing area with an unobstructed view of the sky. That, coupled with Tokyo’s city sounds below, helps to create an unparalleled feeling of being on top of the world. That’s not all; the hot spring is open 3pm-11.30am daily so you can go at almost any time you want. Personally, I found that a short soak before going to bed helped me to sleep better.

Customarily, food is included in the cost of your stay at a ryokan but at Hoshinoya Tokyo, you can opt to top up ¥4,000 (about S$50) per person for a Japanese or Western breakfast served in the room any time between 7am and 11am. Served in beautiful, wooden bento boxes, it’s by far the most intricate bento-style meal I’ve ever had. The Japanese breakfast featured rice with a well-cooked salmon fillet alongside a variety of side dishes and fruits while my favourite part of the Western breakfast was the clam and leek omelette. 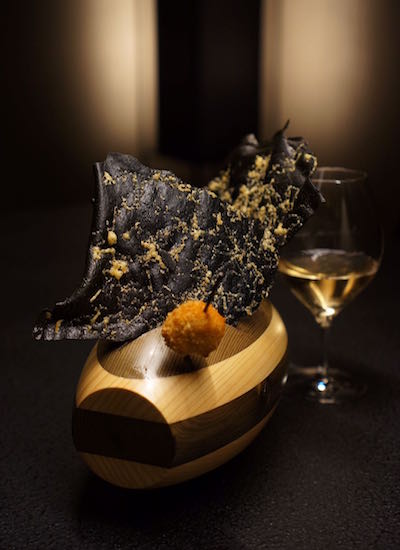 However, for a full taste of Hoshinoya Tokyo’s brand of nouvelle ryokan cuisine, head downstairs to their restaurant for Chef Noriyuki Hamada’s degustation dinner (¥18,000, about S$225). A bronze medalist at the 2013 Bocuse d’Or (one of the most prestigious gastronomic competitions in the world for chefs), Chef Hamada focuses on French cuisine utilising seasonal Japanese produce, with an emphasis on the use of fish, which plays a large role in the Japanese diet even today.

We started with a duo of amuse bouche – a crunchy charcoal cracker inlaid with fish bones and a nicely battered ball of cod liver. If you still remember the history of the neighbourhood, you’d be interested to know that the drum-like vessel on which they served the snacks were partially made from old wood that used to be part of a daimyo residence. Talk about history on a plate! This was followed by the first course – a light yet flavourful akamutsu (rosy sea bass) consommé with seaweed.

The next dish wowed us on sight because they were the biggest clams we’ve ever seen on the dining table. The flesh of the hamaguri (also known as the common orient clam) was first removed and pan seared with seaweed butter. It’s then placed back into the shell and closed with a rice flour crust and oven baked before being served. An artful shellfish dish that tasted, rightfully, like the sea. 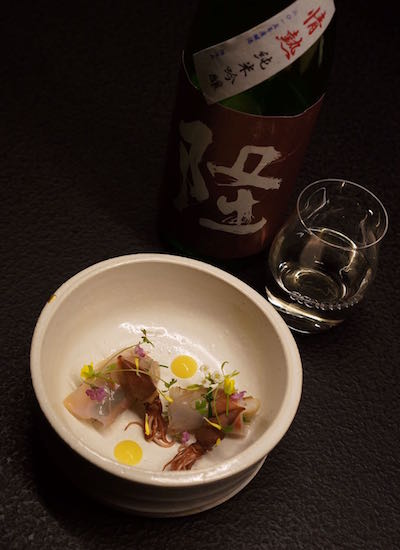 A sour, pickled kohada (gizzard shad) and seaweed roll refreshed the palate for the umami onion gratin soup with sake. Ground fried chrysanthemum powder coat the savoury potato croquette while the spiced blood sausage was paired with katsuo (skipjack tuna) and apple. The sweet combination of persimmon, cream cheese, and chestnut rounded up the fundamental five.

Akamutsu makes another appearance; indeed, it takes centrestage in the next course. Wrapping the rosy sea bass carpaccio around a grilled slice of the same fish was an interesting play on textures, as was adding boiled hotaru ika (firefly squid) to the dish. There are many fishy flavours at work here, so the yuzu puree dotting the plate acted as a palate cleanser between bites – we can’t say it wasn’t well thought out.

Chances are, you never had Anglerfish (yes, the fish with a flesh growth on its head to lure its fishy prey) before. Neither did I, until now. After passing through Chef Hamada’s hands, this ugly, bony sea creature is whole transformed into a pretty plate. Served in anglerfish broth with fried yama imo (mountain yam) and a deliciously charred leek, it’s accompanied by a side of anglerfish liver that you can dissolve into the soup to adjust the taste and texture. Coupled with the yuzu citrus that lingers on the palate, it’s delicate and complex at the same time.

We thought the Spanish Mackerel was the most regular thing on the menu…until we realised that the plate it was served on was perfumed with lemon and yuzu before serving. Pan seared and glazed with chicken jus, the firm flesh of the mackerel held itself well with the mashed potato with fish stock and tuna bacon. The last savoury dish of grilled bamboo shoots and eel, paired with a sweet and spicy ginger sauce, came encased in fibre, alluding to bamboo shooting up from the ground. Represent the coming of spring, the ‘soil’ is really acorn powder.

If you love yuzu, you’d love the first dessert of sake jelly topped with yuzu peel meringue and yuzu espuma. Winter is yuzu season (we visited towards the end of the season), thus the generous use of the fruit throughout the menu. The second dessert featured a very Japanese combination of sesame and sweet potato. According to Chef Hamada, the sweet marriage has been a long-established one and his dessert was inspired by the same nostalgia. We were impressed by the number of petit fours. 10 to be exact, of which the roasted tea and chestnut mousse, kinako marshmallow, as well as strawberry and black vinegar jelly were standouts. Alcohol pairing is available at ¥10,000 (S$125) for the full course and ¥4,500 ($56) for the half.

In a nutshell, it would come as no surprise to you that HOSHINOYA Tokyo costs a pretty penny, with rooms starting from US$700 per night. That said, you are paying for the experience and a sort of informal education. So if the seamless melding of the old and new, the traditional and modern is something you love, Hoshinoya Tokyo is probably worth the splurge if you can afford it.

Category 5 Things to do in SingaporePosted on May 16, 2016May 14, 2018
Translate »
X
X
Share this ArticleLike this article? Email it to a friend!
Email sent!