Julien Brochard’s love for music started in his early days. His teenage years were spent strapped to a guitar with rock & roll rhythms rolling off his fingertips, and it wasn’t long before he was introduced to the world of electronic music – with the likes of Gui Boratto, Kink, DJ Tennis, Satori and Ame as his inspiration – and hasn’t looked back since.

Currently resident of The Council, Julien finally found his way to our sunny shores in 2015. In the short span of 6 months soaking up the local scene and our many idiosyncrasies, he managed to catch the attention of promoters across the island, putting him at the controls of massive dance floors at experiential dance parties. His versatility also allowed him to spread his gospel of all things deep and tropical at intimate venues the likes of Headquarters, kyō, CATO, MeatLiquor, Sofitel So and more.

In this edition of City Nomads Radio, we speak to Julien Brochard about his sound and his journey. Hi Julien! Tell us more about yourself?

I was born in the west of France and spent my childhood in a small city before moving to Paris when I turned 20. While living in Paris, I spent some time in the US and Eastern Europe, and that shaped my musical tastes along the way. Being able to travel and attend music events and festivals allowed me to meet many people from different backgrounds, and experience different cultures. These have all shaped who I am now and my approach to music.

What got you into DJing?

Music was always a big part of my life, starting with a guitar when I was younger before I discovered the art and joy of DJing. In high school, one of my friends would DJ at our house parties and that was how I got started. Moving to Paris helped expand my musical horizons and my experiences in different cities also influenced my music. How did everything start in Singapore, from playing smaller gigs to becoming one of The Council’s residents?

It all started with a night out with my roommate, when I had first arrived in Singapore for a 6-months internship. He had brought me to a Block Party that was organised by Sunshine Nation.
That same night, I was introduced to the owner of the bar where the party was held, and I ended up asking him if I could have a go on his equipment as I was going to be here for a while, but didn’t bring my own DJ gear. The following week I came back to the bar and while I was DJing, a guy had come up to me, and told me he liked my music. This guy turned out to be Alex, one of the guys from Sunshine Nation…and the next thing I know, I ended up playing at one of their block parties a couple of weeks later. That first gig opened up the doors to many more!
I returned to France to finish up my degree, and fortunately landed a job at the same company I had interned at before. I came back in January 2016, and around then, Clement and Eileen had just started to organise events and parties as The Council. I played for one of their pop-up parties, and I guess they liked it because they offered me to be one of their residents right after that. Since then it has been an amazing journey, going from pop-up parties to the launch of Headquarters located at Boat Quay. It’s been a crazy ride in the past few months.

Describe your sound in less than 10 words. Which DJs would you want to play alongside in the near future?

There are so many! The first one that comes to mind would be Gui Boratto. I had seen him perform live in Paris, in possibly one of the worst clubs I have ever been too. It was way too crowded that night, and must have been 40 degrees in that room. But I stayed in the front row with my friend, and we didn’t leave our spot until he played the very last beat. It was one of the most memorable gigs despite the conditions.
DJ Tennis would be another one, as I fondly recall one of his sets at a Life and Death showcase. He was doing the warm-up before Tale of Us and Mind Against, and I was blown away by his set. Possibly the best warm-up set I have ever heard! Other picks would include Amirali, Len Faki, Rodhad and Marcel Dettmann. A boy can dream, right?
[mixcloud https://www.mixcloud.com/citynomadsradio/city-nomads-radio-25-julien-brochard/ width=100% height=120 hide_cover=1 light=1]

Tell us more about your curated mixtape for City Nomads.

​I have been asking myself ​many​ questions about this mixtape. Initially, I’d wanted to put together some sunset vibes that I haven’t got a chance to play a lot these days, but then I wondered if it was a suitable representation of my sound. T​he t​ruth is I couldn’t find the right way to do it. I am playing so many different kinds of sounds, depending on the time and the place, from sunny house to dark techno​, that I found it hard to summari​s​e it in a mix.
Then I remembered this set I did a​w​h​ile back. ​It was j​ust after I became one of The Council’s residents, Clement and Eileen asked me for a mix that they could​ use to ​represent me and my brand of music.​ It was never publicly shared, and I guess this is a good occasion. At that time, this ​was​ how I felt describe​d​ my music – most of the track​s​ you’ll hear, they used to be unreleased, and now looking back at it​,​ it’s funny to see their evolution in the past months. Some of them were really popular​ before it was released​, and after their release they are not anymore. Some are still unreleased and people ​have ​forgot​ten​ about it. Some were not really famous but spread a lot after their release. I guess it shows how music is consumed in our modern society, just like everything else. How everybody wants something so ​much​, to throw it away a couple weeks later. How DJs are constantly teasing with unreleased tracks, how it makes them sound better than they are in reality, and how when people get access to it they are already bored with it and seeking the next one. So in the end, ​I guess ​maybe there is more with this mix than what appears at first listen​? 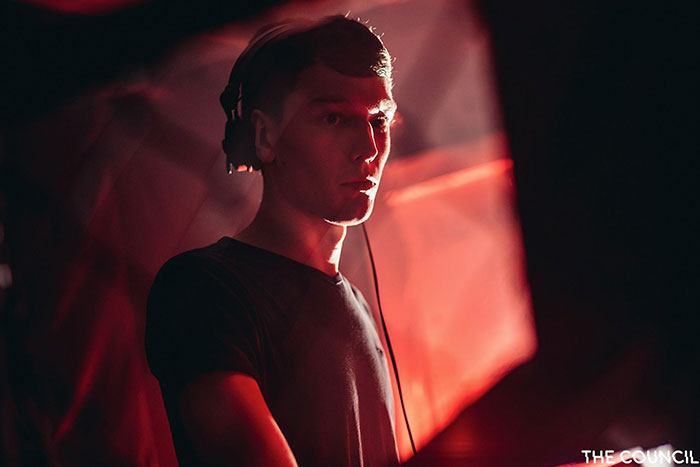 Wow, there are so many. Here it goes in chronological order…
To Baptiste, for introducing me to DJing almost 10 years ago now;
To my friends at engineering school for sharing my passion for music during the 3 amazing years in and around Europe;
To Matthias for bringing me out to my very first Block Party;
To Laurent for letting me have a spin at Gong;
To Alex & Bernhard from Sunshine Nation for trusting me and having me play at their parties;
To Haan for his support, and the opportunities he’s given me, and for introducing me to the local scene;
To Clement & Eileen, for this amazing experience with The Council, from the parties at the very beginning to all the crazy nights at the Headquarters.
And of course to my friends who have been there at every single gig (they know who they are), and to all the promoters and venues who have invited me to play, and the local & international DJs I have had the great opportunity to share the decks with.
Last but not least, to Sharmaine & the City Nomads team for this interview!
–
To stay updated of Julien Brochard’s news and upcoming gigs, follow him here:
Facebook | Soundcloud ArtScience Museum’s Art From The Streets: Sufficient Representation of the Street Art Movement or Not? Category 5 Things to do in SingaporePosted on May 23, 2016May 14, 2018
Translate »
X
X
Share this ArticleLike this article? Email it to a friend!
Email sent!